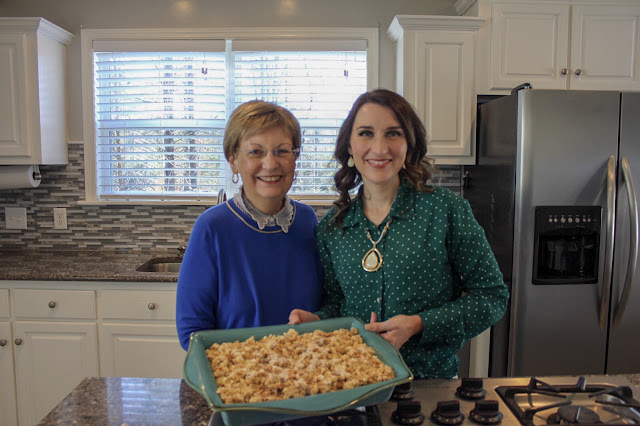 Thanksgiving is one of my favorite holidays.  It is a day filled with some of my most loved things; family, food (like this Thanksgiving Dressing) and shopping! While I am always thankful for my family, this year I feel especially thankful for my mama.  It has been a year full of struggles for her and I finally feel as if we can see a light at the end of the tunnel.

About My Mama’s Illness

A brief back story for those of you that may not know me on a personal level.  Back in August of 2017 my mama woke up with a really swollen lymph node under her arm.  She went to the doctor and was told that it was probably an infection and they administered IV antibiotics.  When that did not fix the problem, she had a biopsy and the lymph node was removed for testing.  At this point they believed that she had lymphoma of some kind.

Fast forward a couple of weeks and she still did not have results.  You should probably know that I am a pretty impatient person. I know I was driving her crazy calling her every hour asking if she had heard results from the doctor.  I could not understand what in the devil was taking so long!  FINALLY, the doctor called and told her that she had something that he did not really understand enough to explain and that he would schedule her with a hematologist/oncologist to review, but that she did not have lymphoma.  (Yeah, it is comforting when the doctor hasn’t heard of it.)

Amyloidosis and Her Treatment

On one hand I wanted to be excited because it wasn’t lymphoma but on the other, the unknown is frightening!  I went with her and my dad to the doctors appointment and she was officially diagnosed with Amyloidosis.  I linked you to a page that can explain this disease further.  This disease is pretty rare and only about 4,500 a year are diagnosed with it.  I feel like I am a pro at explaining it at this point, but it is so complicated the link is probably best.

My mama has had a year filled with tests, scans, chemo and a stem cell transplant.  She has been sick with nausea and stomach issues from where the amyloid impacted her GI tract both before and after the transplant.  Food does not taste very good at times and even when she gets a craving for something it doesn’t quite taste like she hoped.  But even with all of that she will still get up sometimes, cook a huge meal and call me after work to come and have dinner so I don’t have to cook when I get off.  I can’t even begin to tell you all how much my mama amazes me with her strength and giving heart.  I will always be extremely grateful that God blessed me with her as my mama.

Thanksgiving is a family affair.  I have a pretty big family and we all live very close to each other.  My brother and sister in law have 6 children (3 biological and 3 adopted, I will write about that story one day soon!).  My sister has 3 cute kids and I have 2, but my oldest is 22 so she isn’t really a kid anymore.  Typically, my uncle, cousin and Mamaw come too, so it is a full house.

We take our food very seriously at Thanksgiving.  My mama has always made the dressing for as long as I can remember.  And this year, she is making one and I am making one too.  Even though I followed her recipe to the letter, for some reason I bet hers will still taste slightly better.  What is it about your mamas food that makes it better than when you make it? Haha! 😉

I made a video below that goes through the steps, give it a watch and comment either here or my last Instagram post to tell me what you think.  The full recipe is below the video.  I was a little nervous to film myself, so forgive my constant RBF.  I was happy, I swear! LOL!  I would love to hear how you do your dressing different and tell me what your favorite Thanksgiving food is too!

Crumble the cornbread, biscuits, bread and dressing mix into a large bowl.  Heat water and butter on medium heat and add the onions and celery, cook until tender.  While the onions and celery are cooking, brown the sausage.  Once it is browned, add sausage (+ pan drippings) and the hard boiled eggs to the bread mixture. When the onions and celery are tender, add them as well.  Mix well.  Add salt, pepper and poultry seasoning to taste.  Add two eggs and slowly add the chicken broth and continue to mix.  Once it is mixed well and has a sticky consistency, crumble the dressing mix into a buttered casserole dish. Bake at 350 for 30 minutes or until browned.  You can make the Thanksgiving dressing ahead of time and freeze.  Just take it out of the freezer and thaw completely before placing in the oven.
35.3187279-82.4609528